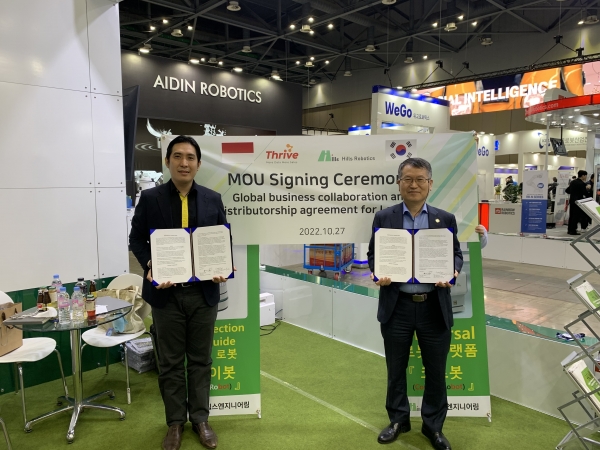 Hills Robotics, a company specializing in self-driving logistics robot technology, has signaled its entry into the global market.

Hills Robotics has Solomon, an artificial intelligence-based autonomous driving all-around platform that can be applied to various types of robot implementations.

Solomon is a customized autonomous robot operation software that has the meaning of Solution On Demand and is called a “Bisfork” of a kind of robot operation platform because it can respond to various types of robots.

Hills Robotics signed an MOU with Indonesia’s leading robot company Thrive at Robot World 2022 held from October 26 to 29, and signed an export contract with Robots, a representative logistics robot, and Solomon, a logistics operation platform.

Thrive is a mid-sized company that carries out various businesses in Indonesia as a subsidiary of Bright Corporation Group in Indonesia, which was created as a joint venture with Itochu Group, a leading Japanese trading company.

“Based on Thrive’s ability to grow its ERP and WMS solution business, we have signed a close business cooperation and step-by-step technology transfer with Hills Robotics, which is recognized in the global market,” said Eddy, CEO of Bright Corp.

Hills Robotics plans to explore Indonesia’s new business area through cooperation with Thrive in the future, and strengthen close cooperation between the two companies to expand the robot industry through internalization of local partner companies’ robot hardware business capabilities and technology transfer.

In addition, the software sector promised mutual cooperation to actively pioneer various robot businesses in Southeast Asia through Solomon owned by Hills Robotics. In addition, it will also connect the interface to the Alansoft package, a WMS owned by Tribe, to win orders for robot supply at various sites.

With this robot export, Hills Robotics plans to actively utilize Thrive’s business network in Indonesia to target Indonesia’s huge market, the world’s fourth-largest population. After the shipment of robot exports in November, domestic engineers will be dispatched to Indonesia to cooperate through the Strategic Global Partner Training Program (SGPTP), a partner education and training program such as robot operation field technology, robot operation follow-up management, and hardware design technology.

In addition, as a member of the Singapore-based Asia Pacific Assistant Robot Association (APARA), it plans to actively target the Southeast Asian robot market by utilizing the Southeast Asian network to increase its market share strategically. To this end, it is also working closely with partners in Singapore, Silicon Valley in the Americas, Zurich in Switzerland, and Toronto in Canada.

Park Myung-kyu, CEO of Hills Robotics, said, “Hills Robotics has also participated in CES, which has been participating every year since 2020, and is vigorously stepping on the accelerator pedal to expand the market in the Americas.” In particular, next year, we will be invited to the prestigious Robot Special Hall exhibition company in recognition of our experience of jointly participating with KAIST’s URL Research Institute and winning the CES Innovation Award for the first time as a startup.”

Meanwhile, Hills Robotics’ global sales activities in the second half of the year are remarkable. It signed an MOU for smart logistics business cooperation with the logistics leader, who is creating a dynamic impact on the market while acting on behalf of BodyFriend’s installation logistics.